Meaning of the Reiki kanji
​

Here you will find a brief explanation of the meaning of the Reiki symbol, or kanji. I feel that it is important to understand how each stroke represents a very specific aspect of the spiritual journey which Reiki inspires in each and every one who embraces it. 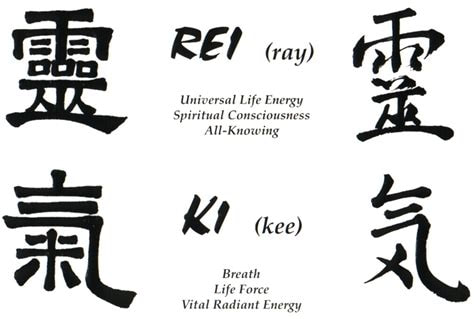 The Reiki kanji in traditional calligraphy (left) and modern characters (right)
In the image you can see the kanji (symbol) for Reiki written using traditional symbols (left hand side) and then the modern version (right hand side).

The kanji of Rei 靈 has 3 parts; 雨, three 口and 巫.
1.  雨 ame (rain), is a blessing from the Universe.
2.  The three squares 口​ (kuchi) are mouths, vessels, or the three elements of a human being; body, mind and soul.
3.  巫 (miko) is a medium or shaman, who channels God’s will and her mission is to connect heaven and earth.

The original meaning of Rei 靈 is the unity of the Universe with a human being. We see the canopy of heaven from which four drops of rain (ame) are falling into three containers or mouths (kuchi). The symbolism of water is very significant spiritually in that it is endlessly adaptable. Water is responsive, changes form, and flows easily around obstacles, but water also has the capacity to slowly dissolve obstacles and carry them along (cleansing and healing). Below the rain and containers, a shaman, usually a female (miko), stands on the earth, ready to receive the gift of the Universe, of God. Man is no longer a mouth, but a mirror of creation, aware of its body as a temple.

The kanji for Ki 氣 is made up out of 气 and 米 In the kanji of Ki we can see rice, representing nutrition (symbolising the energy dispersing in all directions from the center) surrounded by a vapour or steam, representing the steam given off when rice is cooking in a pot.

It is worth noting that the modern character for Ki (right hand side of the image) that we use today is written like this: 気. This character has メ  (instead of 米) , which means to seal or shut; but we want the universal energy to disperse and move, rather than to be sealed off. According to traditional Chinese medicine, there is no good or bad energy, only stagnating energy, therefore to be representing Ki as something inherently stuck and closed seems to me to go against the soul of Reiki.

Putting this symbolism together, we have a representation of the trinity found in many diverse spiritual traditions: Heaven, Earth and Man, known as Ten-Chi-Jin in Japan. To summarise, in the kanji for Rei, the rain symbolises life-giving energy from heaven in the form of water, collected in the three containers or mouths where it can directly revitalise mind, body and spirit. The shaman acts as an intermediary between heaven above and the earth below, where the energy-giving rice grows and provides mankind with sustenance and energy from the earth. Thus, the heaven energy (macrocosm) combines with the earth energy in the heart of the shaman (microcosm), allowing her to become fully balanced as a unity and realise her true nature.

This is the spiritual essence of Reiki practice: we receive the universal energy which falls upon us like rain, we become the vessel for our spirit and transmit the healing life energy to those who are in need.